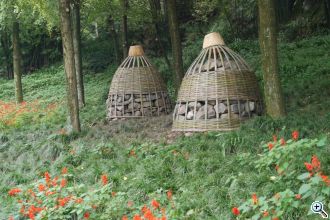 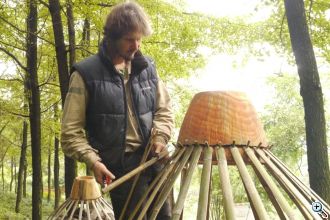 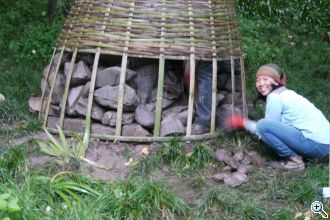 Two structures made out of a bamboo cage with a wooden top piece and filled with natural broken stones. The installation sits under some ginko trees in a grassy spot. Inspired by barnacles as a ancient little animal, stuck to stones or even other animals in the sea. These two baskets have a very similar shape with an opening on top. In fact they represent the life itself, but already petrified. In this sense we find the life and the death and we find also history in this piece. In this important location of Yulei Mountain, known for its ancient irrigation system, similar bamboo baskets can be found, also filled with round river boulders to block the water. So the third element, the history is part of the work. Culture is founded by people, they live and create, like Li Bin with his irrigation system. They die and other people add new inventions, like basketry in old civilizations, until a culture is shaped. This can be found in every field of human being. This is a ongoing process and a flow in time.